What is one of your favourite memories of living at SJC?
Organizing restaurant trips! We tried Malaysian, Dutch, Vietnamese, Italian, French, Greek, First Nations, Ethiopian, Burmese, Mexican, Thai, Afghan, Nepali, Korean, Cambodian, and Ukrainian food together. We often had residents from the respective region who could explain their food culture to us. We learned so much from each other. The food trips were also a good break from studying.

What unique qualities of SJC did you appreciate the most?
The diversity – not only our countries of origin, but also our academic disciplines, religious views, political orientations, and gender identities. These differences often led to heated arguments and debates, through which we learned how to listen and co-exist with respect. When we lived in the same space and saw each other every day, we had no choice but to confront and resolve issues together. This was an invaluable learning experience for anyone who wants to be a global citizen.

What do you miss about living at SJC?
How easy it was to get a hold of a friend, organize a gathering spontaneously, or get quick help (e.g. troubleshoot a computer error, borrow a cable) through the SJC list-serve. Once I had some questions about statistical tests, and I simply went downstairs to the dining hall, where I found two PhD candidates in Statistics who were happy to help. The SJC community truly possesses a great wealth of knowledge and talent.

How did living at SJC support your academic and/or career development?
In 2015 I participated in the SJC heats of the Three-Minute Thesis public speaking competition. I did it for fun and didn’t expect to gain any reward. With the support of SJC residents and staff, I won First Place and People’s Choice at the UBC final round and Second Place in the Universitas 21 global competition. I was then invited to be a keynote speaker at the Cantonese Worlds conference, where I met community activists and journalists from CBC, Singtao, Mingpao etc. I was inspired to communicate my academic work to a wider audience. These experiences would not have happened if I did not live in SJC.

What kind of career opportunities have you had since living at SJC?
I ran a Cantonese language class for SJC residents in 2013 and 2014, which attracted students outside SJC. Later I was invited to teach a community class in Vancouver Chinatown, where I developed my passion to promote heritage languages to second or third generation Chinese Canadians. Gradually I gained teaching experience and built networks with community leaders. Before I defended my dissertation, I was offered to teach Cantonese at UBC Asian Studies. Looking back, I am amazed by how one opportunity led to another, and brought me to where I am today.

What advice do you have for residents currently living at SJC or preparing to leave the College?
If you have an idea to organize something, implement it! Yes, you will need to offer your time and effort, but you will be pleasantly surprised by how much you gain when you look back. 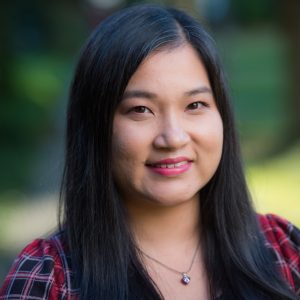